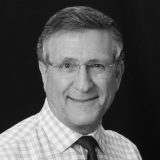 In 1995 he was hired as the Executive Director of Alta California Regional Center where he served for 10 years, managing a staff of over 300 employees and an annual budget of $175 million.

For the past 12 years he has been consulting and advocating for individuals with disabilities and their families to assist in accessing public benefits including Regional Center, SSI, SSDI, MediCal, IHSS, Special Education, CCS etc.  In particular he works closely with attorneys and Trustees as a Consultant regarding Special Needs Trust.  He has also served as an Expert Witness in a number of civil lawsuits.