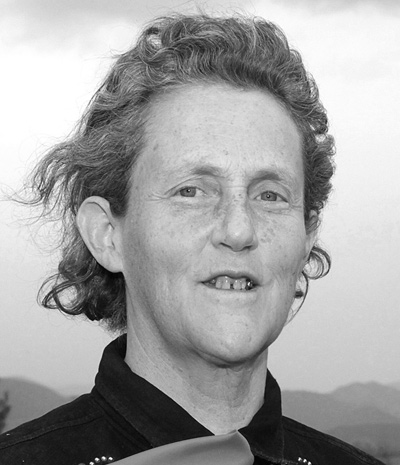 Dr. Grandin did not talk until she was three and a half years old.  She was fortunate to get early speech therapy.  Her teachers also taught her how to wait and take turns when playing board games.  She was mainstreamed into a normal kindergarten at age five.  Oliver Sacks wrote in the forward of Thinking in Pictures that her first book Emergence: Labeled Autistic was “unprecedented because there had never before been an inside narrative of autism.”  Dr. Sacks profiled Dr. Grandin in his best selling book Anthropologist on Mars.

Dr. Grandin became a prominent author and speaker on both autism and animal behavior.  Today she is a professor of Animal Science at Colorado State University.  She also has a successful career consulting on both livestock handling equipment design and animal welfare.  She has been featured on NPR (National Public Radio) and a BBC Special – “The Woman Who Thinks Like a Cow”. She has also appeared on National TV shows such as Larry King Live, 20/20, Sixty Minutes, Fox and Friends, and she has a 2010 TED talk.  Articles about Dr. Grandin have appeared in Time Magazine, New York Times, Discover Magazine, Forbes and USA Today. HBO made an Emmy Award winning movie about her life and she was inducted into the American Academy of Arts and Sciences in 2016.

When she was young, she was considered weird and teased and bullied in high school.  The only place she had friends was activities where there was a shared interest such as horses, electronics, or model rockets.  Mr. Carlock, her science teacher, was an important mentor who encouraged her interest in science.  When she had a new goal of becoming a scientist, she had a reason for studying.  Today half the cattle in the United States are handled in facilities she has designed.

The Problem With Labels
In 2013, the American Psychiatric Association revised the diagnostic criteria for autism.  This greatly broadened the spectrum.  It now ranges from brilliant scientists, artists, and musicians to an individual who cannot dress himself or herself.  Over the years, the diagnostic criteria have kept changing.  It is not precise like a lab test for strep throat.  Labels such as autism, ADHD, sensory processing disorder or learning disability are often applied to the same child.  In older children with no speech delay, the diagnosis sometimes switches back and forth between autism and ADHD.

“One of the problems today is for a kid to get any special services in school, they have to have a label.  The problem with autism is you’ve got a spectrum that ranges from Einstein to someone with no language and intellectual disability,” said Grandin.  “Steve Jobs was probably mildly on the autistic spectrum.  Basically, you’ve probably known people who were geeky and socially awkward but very smart.  When does geeks and nerds became autism? That’s a gray area.  Half the people in Silicon Valley probably have autism.”

As the number of children diagnosed with autism continues to rise nationally, Grandin is sharing her message about the disorder and “differently-abled brains” with packed houses.  At the heart of that message is this: Rigid academic and social expectations could wind up stifling a mind that, while it might struggle to conjugate a verb, could one day take us to distant stars.

“Parents get so worried about the deficits that they don’t build up the strengths, but those skills could turn into a job,” said Grandin, who addresses scientific advances in understanding autism in her newest book, “The Autistic Brain: Thinking Across the Spectrum.” These kids often have uneven skills.  We need to be a lot more flexible about things. Don’t hold these math geniuses back. You’re going to have to give them special ed in reading because that tends to be the pattern, but let them go ahead in math.”

Early diagnosis can lead to early intervention and access to special education programs, and, while crucial for children with speech delay, also means a permanent label that ultimately could impede progress, and the healthy development of a child’s identity. There are other situations where an autism diagnosis is helpful for an older person who is having problems with relationships. It can give them great insight, and enable them to improve relationships.

Have High, But Reasonable Expectations
A label can also impact parental expectations, a major source of therapeutic momentum for children.  A parent with a diagnosed autistic child might be reluctant to teach practical social skills that are outside the child’s comfort zone, such as ordering food at a lunch counter. You have to stretch these kids just outside their comfort zone to help them develop.  Give them choices of “stretching” activities such as you can do Boy Scouts or robotics.

“It hurts because they don’t have enough expectations for the kids.  I see too many kids who are smart and did well in school, but they’re not getting a job because when they were young, they didn’t learn any work skills,” Grandin said. “They’ve got no life skills.  The parents thinks, ‘Oh, poor Tommy. He has autism so he doesn’t have to learn things like shopping.” Grandin was raised by her mother in the 1950’s, a time when social skills were “pounded into every single child,” she said. “Children in my generation, when they were teenagers, they had jobs and learned how to work.  I cleaned horse stalls.  When I was 8 years old, my mother made me be a party hostess – shake hands, take coats, etc. In the 1950’s, social skills were taught in a much more rigid way so kids who were mildly autistic were forced to learn them. It hurts the autistic much more than it does the normal kids to not have these skills formally taught.”

“In my generation, paper routes taught important working skills.  Today, parents should set up jobs a child can do in the neighborhood such as walking dogs for the neighbors.  Younger children can do volunteer jobs outside the home such as being an usher at a house of worship or community center.  This will teach both discipline and responsibility.  It improved my self esteem to be recognized for doing a job well.”

“The skills that people with autism bring to the table should be nurtured for their benefit and society’s.” Grandin said. “And, if a cure for autism were found, she would choose to stay just the way she is.

“I like the really logical way that I think.  I’m totally logical. In fact, it kind of blows my mind how irrational human beings are,” She said. “If you totally get rid of autism, you’d have nobody to fix your computer in the future.”

Educating Students with Different Kinds of Minds
If algebra had been required course for college graduation in 1967, there would be no Temple Grandin. At least, no Temple Grandin as the world knows her today – professor, inventor, best-selling author, and rock star in the seemingly divergent fields of animal science and autism education.  “I probably would have been a handyman, fixing toilets at some apartment building somewhere,” said Grandin. “I can’t do algebra.  It makes no sense. Why does algebra have to be the gateway to all other mathematics?”

The abstract concepts in algebra present a common stumbling block for many with an autism spectrum disorder, dyslexia, or other learning problems.  Many of the kids would do well if geometry was substituted for algebra. For autistic and photo-realistic visual thinkers, such as Grandin, understanding comes from being able to see and work through a concept in images, creating what is in effect, a virtual reality program that plays out in the brain.  In this manner, Grandin, who didn’t speak until she was almost 4, conceptualized down to minute details her design for a humane livestock restraint system now used on nearly half to the cattle in the U.S.

Fortunately, the academic trend in the late 1960’s was finite math, a course Grandin passed with the help of tutors and devoted study, satisfying her college math requirement.  She went on to earn a bachelor’s degree in psychology and both masters and doctoral degrees in animal science.  For the past two decades, she’s been a professor at Colorado State University.

In her book, The Autistic Brain, she presents research findings that definitely show three types of specialized thinking.  They are the photo realistic visual thinkers who think the way I do, math/pattern thinkers and word thinkers. Children who think differently will often thrive if they have more hands-on activities.  Parents need to work with the schools to make sure that elementary school children have art, music, theater, sewing, woodworking, computer programs, and cooking .  These classes teach important career skills and provide opportunities for students to have social interactions with their peers.  Older students need to have access to career related classes such as welding, auto mechanics, and computer science.

There is a huge shortage of skilled mechanics. When I worked in construction installing my systems, I worked with many talented mechanics and metal fabricators.  Some of them may have been on the milder end of the autism spectrum.  These people were brilliant and they built very complicated things.  Skilled trades are not for everybody on the spectrum.  I estimate that a skilled trade would be a good choice for 25% of fully verbal people with ASD.  When I look back on a long career, some of the best days of my life were out at a construction site.  It was so much fun to talk about building things.

If you’d like to bring a guest/spouse to two receptions, all meals and attend the Dr. Temple Grandin presentation for $350.